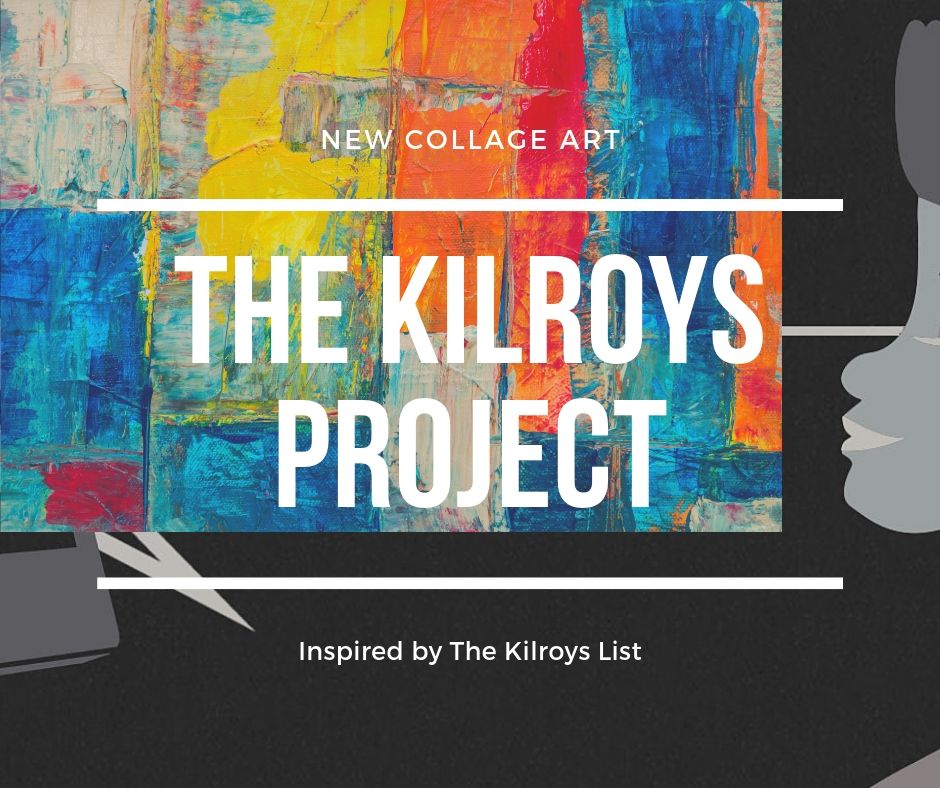 Before I started making collages, I spent my career working in theatre. My most rewarding theatre experiences were working on new works and owning a theatre bookstore, which also hosted new play readings. As with much of the art world, certain groups are still underrepresented, and many groups struggle to correct these inequalities. One group of theatre makers decided they were done talking about gender parity and began taking action in 2014. Each year, this group, The Kilroys, surveys the theatre industry and creates a list of the most recommended un- or underproduced new plays by woman, trans, and non-binary authors.

As a personal challenge, I have taken the 33 plays recommended in this year’s Kilroys List as the inspiration for a series of small collages. The title, itself, may be the inspiration, or the theme of the play may inform the artwork. Overall, my goal is to shine a light on these plays and playwrights, and interpret their ideas through another medium.

Check here often for the latest in this series, and go read or see some new plays by this talented group!

A noted photographer sets out to explore the topography of “scars.” Her journey lands her in the mysterious realm of an undiscovered folk artist hiding away in North Alabama. ALABASTER is about an artist who lost her entire family (and nearly died herself) in an Alabama tornado. Three years since the devastation, JUNE has isolated herself, along with her goats WEEZY and BIB, on what remains of her family farm. JUNE is covered, from head to toe… with scars. She suffers from agoraphobia and crippling PTSD. She gets up every day and she feeds the goats, weeds the garden, and picks up her paintbrush. ALICE, a world-renowned photographer, has come to take pictures of JUNE for a series on women with scars. But ALICE is carrying scars of her own and IS desperately trying to outrun her own pain. The sexual tension between JUNE and ALICE is immediate and ever-present. But what they need from each other transcends the physical. What does it mean to be truly “seen?” How do we pick up the pieces? How do we move forward?

Other plays by Audrey Cefaly: MAYTAG VIRGIN, THE GULF (winner of the 2018 Lammy Award for LGBTQ Drama), THE LAST WIDE OPEN, LOVE IS A BLUE TICK HOUND

LIPSTICK LOBOTOMY imagines a friendship between JFK’s little sister Rosemary Kennedy and the playwright’s great aunt Ginny at an exclusive high-end sanitarium for women in the fall of 1941. The women undergo the peculiar cutting-edge treatments on offer by a society desperate to find the cure for womanhood. When Rosemary is selected by the famous surgeon Dr. Walter Jackson Freeman II for an exciting new procedure, Ginny will do everything in her power to take control of her own future.

It’s 2009, and four Iranians assemble triweekly in a TOEFL (Test of English as a Foreign Language) class in Karaj, Iran led by anglophile Marjan, who abolishes Farsi from her classroom. As the class slowly devolves into a linguistic mess, some students cling tighter to their mother tongues while others embrace the possibilities of a new language. As the students translate Shakira songs and endure major preposition confusion, we are left with questions of how to be funny in another language and what we lose before the migration takes place.

Read a sample of English here.

Involuntarily displaced in Chicago two months post-Katrina, 13-year-old Davis wrestles with the cultural landscape of a new city and school community while secretly coping with the PTSD of an assault at the Superdome. With her mother still in New Orleans committed to the fight for Black land ownership and her father committed to starting a new life in the Midwest, divorce threatens to further separate a family already torn apart. Will Davis be left hanging in the balance? [hieroglyph] traverses the intersection of environmental racism, sexual violence, and displacement, examining the psychological effects of a state-sanctioned man-made disaster on the most vulnerable members of the Katrina diaspora.

Read a sample of [hieroglyph] here.

If you enjoy what you see here and want to help me keep making art, please consider using this link whenever you are shopping on Amazon – you pay no more, but I earn a small commission with every purchase. Thanks in advance!